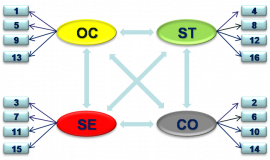 The Work Values Scale EVAT (based on its initials in Spanish: Escala de Valores hacia el Trabajo) was created in 2000 to measure values in the work context. The instrument operationalizes the four higher-order-values of the Schwartz Theory (1992) through sixteen items focused on work scenarios. The questionnaire has been used among large samples of Mexican  (see Arciniega & Gonzalez, 2005: 2006; 2019) and Spanish (see Gonzalez y Arciniega, 2005) individuals reporting adequate psychometric properties. The instrument has been translated into Portuguese and Italian. The cross-cultural validity of the three versions has been demostrated using different methods for assesssing measurement equivalence (see Arciniega, González, Soares, Ciulli and Giannini, 2009). The English version of the scale was published in the Journal of Business Ethics (see Arciniega, et al., 2019; Appendix 1).

To learn more about the development and application of the scale in different research projects, click to watch a conference (in Spanish) (in English) or read a brief article in English or in Spanish.
​
Original versión in Spanish (Arciniega & González, 2001)

National percentiles from a sample of 4,689 working adults from 62 different companies located in 22 cities of Mexico.